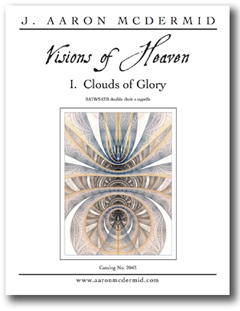 For millennia, theologians and children alike have pondered an afterlife and entertained various visions of heaven.  In this piece I wanted to combine writings from both sacred and secular sources.  The first movement sets a portion of Wordsworth’s Intimations of Immortality.  He states that this passage is a recounting of how he viewed heaven as a child, so I tried to imbue the music with the haziness of a distant memory.  The second movement combines two versions of the popular metaphor of heaven as a city or house—the first is drawn from a sermon of John Donne and the second from a Lutheran chorale, both written in the early 17th century.  The final movement, drawn from Walt Whitman’s Passage to India, offers a vision of heaven that is something like a spiritual journey—one that is not yet complete as the piece comes to a close.

I. Clouds of Glory
William Wordsworth

Our birth is but a sleep and a forgetting:
The soul that rises with us, our life’s Star,
Hath had elsewhere its setting,
And cometh from afar;
Not in entire forgetfulness,
And not in utter nakedness,
But trailing clouds of glory do we come
From God, who is our home.
– from Intimations of Immortality

Bring us, O Lord God, at the last awakening
into the house and gate of heaven,
to enter into that gate and dwell in that house.
Where there shall be no darkness nor dazzling, but one equal light;
no sound nor silence, but one equal music;
no fears nor hopes, but one equal possession;
no ends nor beginnings, but one equal eternity,
in the habitation of thy majesty and thy glory,
world without end.  Amen.
– from Sermon 146

Jerusalem, whose towers touch the skies,
I yearn to come to you!
Your shining streets have drawn my longing eyes
My life-long journey through.

And though I roam the woodland,
The city, and the plain,
My heart still seeks the good land,
My Father’s house to gain.

O soul, thou pleasest me—I thee,
Sailing these seas, or on the hills, or waking in the night,
Thoughts, silent thoughts of Time and Space and Death, like waters flowing,
Bear me, indeed, as through the regions infinite
Whose air I breathe, whose ripples hear,
Bath me O God in thee,
I and my soul to range in range of thee.
– from Passage to India